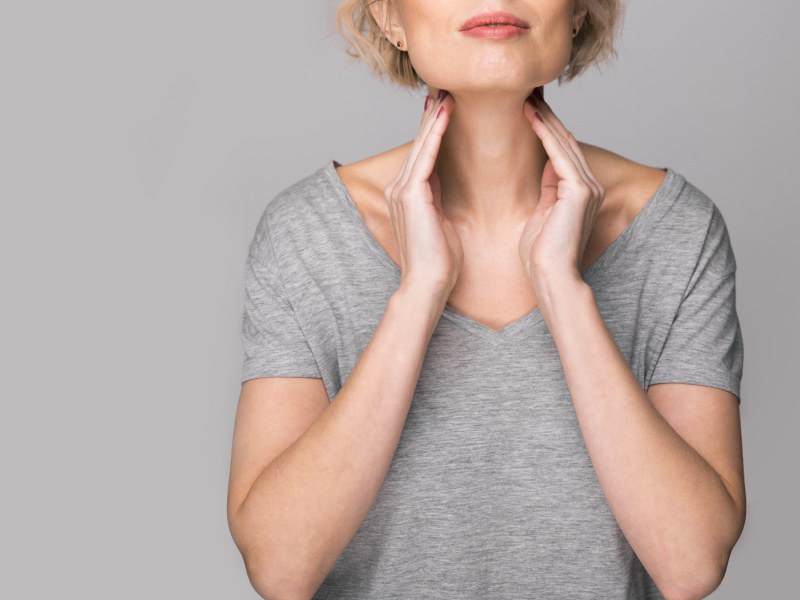 What are thyroid nodules and who is at risk?

A thyroid nodule is a growth of thyroid tissue or a fluid-filled cyst that forms a lump in the thyroid gland. Nodules are very common. The chances of developing nodules in the thyroid gland increase as you get older. Symptoms are not common, but a large nodule enough may cause pain or hoarseness, or get in the way of swallowing or breathing.

The cause of most benign nodules is not known, but they are often found in members of the same family. Worldwide, lack of iodine in the diet is a very common cause of nodules.

How are thyroid nodules diagnosed?

Most thyroid nodules are found during a routine physical exam. Sometimes the nodules are noted on an x-ray study that includes the neck. If a thyroid is found, your doctor will check a blood test to learn if the thyroid is functioning normally. Sometimes, a nodule can be associated with hyperthyroidism (producing too much thyroid hormone) or hypothyroidism (producing not enough thyroid hormone).

However, the blood tests are not enough to test for thyroid cancer. To gather more information about the nodule, your doctor might recommend one or more of the following tests:

What should you do if you think you have a thyroid nodule?

If you think you have a thyroid nodule, see your doctor. Your doctor may refer you to an endocrinologist (a specialist in hormone-related conditions) for diagnosis and treatment. Then get the recommended treatment and follow up with your doctor as needed.

Questions to ask your doctor

Dr. Grady offers this non surgical solution for shrinking thyroid nodules.  RFA is done in comfortably in our office rather than at an outside facility.  For more information on this procedure please call our office.

From the Mayo Clinic

Most thyroid nodules are benign and do not need intervention. However, some thyroid nodules are associated with progressive growth and may result in compressive symptoms and cosmetic concerns that might require intervention — typically thyroid surgery. Radiofrequency ablation (RFA) is a percutaneous treatment that results in thermal tissue necrosis and fibrosis. As a result of this process, the nodules shrink. Clinical trials in Italy and South Korea demonstrated a 50 to 80 percent durable nodule shrinkage after thyroid nodule RFA.

Marius N. Stan, M.D., with Endocrinology, Diabetes, Metabolism, and Nutrition at Mayo Clinic’s campus in Rochester, Minnesota, says, “RFA for the management of benign thyroid nodules was first used at Mayo Clinic’s Rochester campus in December 2013. RFA has been offered to patients with large (≥ 3 cm), predominantly solid thyroid nodules that demonstrated growth or were causing compressive symptoms and cosmetic concerns. Ultrasound-guided fine-needle aspiration biopsy was performed prior to RFA to document the benign nature of the nodule.

“In a publication in the Mayo Clinic Proceedings in 2018, we summarized our experience between December 2013 and October 2016, with 14 patients who underwent thyroid nodule RFA. Multiple nodules were present in 13 of the 14 patients, and the dominant and growing thyroid nodule was the one treated.”

Robert A. Lee, M.D., with Radiology at Mayo Clinic in Rochester, Minnesota, explains: “For pain control and to prevent movement, RFA was completed under general anesthesia. To minimize the risk of complications, the outer approximate 5 mm of the nodule was not treated and the active tip of the electrode was kept at a safe distance to prevent a skin burn. Post-RFA the patients were observed for three hours and released home. The median age of the 14 patients was 60 years.

Matthew R. Callstrom, M.D., Ph.D., with Radiology at Mayo Clinic in Rochester, Minnesota, sums up the results: “After RFA the median thyroid nodule volume reduction was 44.6 percent over a median follow-up of 8.6 months. Of the 14 patients, 13 had normal thyroid function prior to RFA (two were taking levothyroxine replacement) and one had thyrotoxicosis. Thyroid function test results did not change during follow-up in the euthyroid patients and normalized in the patient who had a toxic nodule. Compressive symptoms (pressure in the neck or dysphagia) resolved in eight of 12 patients and improved in the other four patients. Cosmetic concerns improved in all eight patients.”

Dr. Stan continues, “Thyroid nodule RFA was well-tolerated in all of the patients. One patient developed hypotension after the procedure, which was attributed to a vasovagal response due to the deep, posterior location of the nodule in proximity to the vagal nerve. The patient was monitored overnight and dismissed the following day without any residual hemodynamic changes. Three patients (21 percent) developed mild neck discomfort, swelling, bruising and dysphagia shortly after RFA. These symptoms completely resolved within two to five days of the procedure. During follow-up, all patients expressed overall satisfaction with the decision to undergo the thyroid nodule RFA.”

John C. Morris III, M.D., with Endocrinology, Diabetes, Metabolism, and Nutrition at Mayo Clinic in Rochester, Minnesota, adds, “From an economic perspective, the cost of thyroid nodule RFA at our institution is approximately 30 to 50 percent that of a lobectomy. We recognize that our study cohort is small. Additional data are needed to fully assess the utility of RFA in the U.S. population, as most published studies come from a handful of expert centers, mainly in Italy and South Korea. To our knowledge, this is the first study to test the effectiveness and feasibility of thyroid nodule RFA in the United States.”

“In centers with appropriate expertise, this technique could become an alternative for the management of benign large toxic and nontoxic thyroid nodules. Additional studies should be conducted in similar populations with a particular focus on factors predicting greater response to RFA and comparing the performance of RFA with other procedures.”

We have curated an extensive list of resources for a variety of conditions including adrenal diseases, osteoporosis, thyroid diseases, and much more.